The mysteries of the Parliament Building 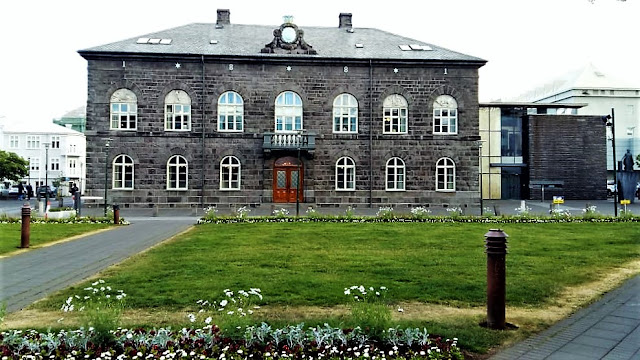 Established in 930 A.D. the Icelandic Parliament, also known as the Althing, is the oldest Parliament in the world still in existence. It wasn't until almost a millennium (950 years) later the parliament members finally got its own building, the Althing House in Reykjavik. It was built in celebration of the 1000 year anniversary of Reykjavík's first settlement in 877 A.D. The building was finished in 1881. Until then, they had their offices at Menntaskóli Reykjavíkur (Reykjavík Jr. College) or just MR, just down the road from Arnarhóll.
The plan was to the Althing House on Arnarhóll, which is said to be the location of the first settlers. Arnarhóll is the hill below the National Theater located on the corner of Hverfisgata and Lækjargata. Building on the hill was perfect. From there everyone would be able to see it. It would practically be on display. Not only that, this area belonged to the country and therefore free to build on. Not wanting to waste anymore time, they transported all the stones needed for the building on to the property and dug a hole for the foundation. They were just about ready to get started on the building.
With a hole in the ground and all the materials ready to use, the men in charge changed their minds. The Althing House would not be built on Arnarhóll after all, but further east in the city by Austurvöllur. The workers had no choice. They covered the hole they had spent much time and energy digging and knew that soon they would be transporting all the building material to yet another location.
The new location hadn't been decided. All they knew was that it was not going to be up on Arnarhóll. They did have an area in mind, though. It was down by Austurvöllur. Appointed men went from house to house offering to purchase their homes so they could build the Althing House on the property. The homeowners were not so willing to give up their homes as was hoped for. One of the homeowners who felt the pressure was the Althingman and headmaster Halldór Kr. Friðriksson (1819-1902). He had been living on Kirkjustræti 12 since 1851. Halldór had a kale garden in his yard and it was there they wanted to build the new Althing house. Eventually he agreed to sell them his kale garden for 2,500 Icelandic krónur.
Just like with most decisions, the public's approval on this new location was split. Many felt it should be built on Arnarhóll, since that was the location of Ingólfur´s first settlement. After all, it was being built in remembrance of the original settlers.
A journalist for the newspaper, Norðlingur, was very frustrated about this new location. To put his anger to good use, he printed his thoughts in the paper on how Arnarhóll was the only appropriate place for the building. It was the Governor, Hilmar Finsen's fault for not wanting to lose the pasture his cows were feeding on up on Arnarhóll. Instead, he felt they picked the ugliest spot possible.

The journalist for Norðlingur was appalled they would purchase such an expensive kale garden when they could have built on Arnarhóll for free. Not only that, now they had to move all the stones and other material that had been collected at Arnarhóll all the way to Kirkjustræti 12.

This was the perfect ranting opportunity for the journalist who kept on about we didn't need an Althing at all the way things were being managed. Governor  Hilmar Finsen was making all the decisions anyway. If only the previous governor, Jón Sigurðsson (1811-1879), had still been alive and gotten a few words in, he would never let such a thing happen.

They finally broke ground on the south-side of the kale garden. It turned out that they were digging too close to the pond resulting in a flooded the foundation. They were forced to stop all digging and start again on the north side of the kale garden which is where it stands today.  The newspaper, Norðlingur, was so concerned about this matter that they called them the Red  Thingmen and begged "Good Jesus help them!"

It was finally time to get started on the building. The plan was to build using Icelandic stone, decorated with an image of Iceland´s first settler, Ingólfur Arnarson.

The first floor was to be the national library, the second floor for the Althing and the third floor to the Antiquities Museum. The attic was designed for the Althing meeting rooms. It is a very cluttered and tight space.

The designing and building of the Althing House was given to the Danish architect F. A. Baldt. He was highly respected and paid his men much more than his counterparts. In fact, when the governor found out what he was doing, he said it was against the law to pay the Icelandic citizens this much more. He was paying his staff 3.00 Icelandic kronur per hour instead of 1.75-2.00 kronur per hour. This upset Baldt and he refused to lower the wages.

It was rumored that Baldt knew kaldabras or cold soldering. Back in the day when the Althing House was being built, this method was kept secret and was only known to those who specialized in iron work. Not understanding how this method, many of the citizens were certain this type of soldering could not be done without otherworldly help, namely with help from the devil. It was a method of inquiring evil spirits or other wicked acts.

When the tools broke, as often happened during constructions, Baldt left with his broken tools only to return shortly after with them fully repaired without any physical signs of soldering with fire. It was obvious that it was magic ... kaldabras.


As is the norm when building houses in Iceland, when the time came to lay the cornerstone, a message was inserted inside it. For the Althing House, it was a silver plaque which was inscribed with, among other things:

"According to the finances of Iceland for the years 1880 and 1881 and Althing's decree 1879, this house is built for the Althing and the country´s galleries on 16th year of governances of Kristian, the King, IX..." (translated by author of article).

A scripture was also engraved into the plaque: Joh. 8:32 The truth shall set you free (Sannleikurinn mun gjöra yður frjálsa).
June 9, 1880, was the official ceremony for the laying down of the cornerstone. The silver plaque along with the blue prints, or a model replica of the building, were put on display in a big tent set up in the park (Austurvöllur) across the street for everyone to see. They put up three poles in the foundation. The two end poles carried the Icelandic emblem, which was a falcon with a blue background.
On one of them was written: with laws shall the land be built and on the other science strengthens all achievements (með lögum skal land byggja and vísindin efla alla dáð respectively). The middle pole carried the royal flag and the emblem with the king´s name, Kristian IX, on it.

Trumpets were heard and the people who had gathered themselves for this big event, joined in by singing Martin Luther's psalm A Mighty Fortress is Our God which he wrote in 1529 (original: Ein' feste Burg ist unser Gott, Icelandic: Vor guð er borg á bjargi traust).

When the singing was over, the governor of Iceland, Hilmar Finsen, put the silver plaque, along with all the valid Danish coins inside a carved-out portion of the cornerstone.  A stone cover was then placed on top and cemented shut.
In his speech, Hilmar Finsen asked God to bless the building and all the work that went on inside as long as the freedom was based on the truth. Then the bishop tapped the stone three times and said In the name of the Holy Trinity (Í nafni heilagrar þrenningar).

Rumors of ghosts inside the building have been heard and told by many of Reykjavik's residents. One is of a reporter working late one evening in the building. Something piqued her curiosity about the attic, so she decided to go explore. She went up into the attic and what she saw up there has never been properly described, except as a horrible nightmare of a ghost.
The type of ghost she saw goes by the name mara and is known to harass people in their sleep and suck out their happiness. It attacks people in their sleep by embracing them with a horrible nightmare. Sometimes they step on or lie on top of the sleeping person to suffocate them.
The name mara is the same as mare in nightmare. Educated people often called it succubus or incubus, which are ghosts who lie down on top of people and copulate while they sleep.
The sculptor and clairvoyant, Vagna Sólveig Vagnsdóttir, known for her art and her weekly appearances for several years on the radio station, Rás 2 during the airing of Næturvaktin (Nightwatch). Some people, including herself, claim there may be sorcery imbedded in her art. Vagna´s father, Vagn, has recorded rhymes, verses and stories in an online oral collection on Ísmús which can be listened to here. Her grandmother was Margrét Sigurðardóttir. Her brother, Vagna´s great uncle, was Jón Sigurðsson. Jón was better known as Jón Forseti or President Jón. He was the leader of Icelandic Independence Movement. His contribution to Iceland´s independence was great that his birthday, June 17th was chosen to become Iceland´s independence day.
Vagna is certain a bad spirit is poisoning the minds of the thingmen. She believes as soon as the thingmen enter the building, their demeanor changes completely by becoming dark and heavy. The building is sick and the best thing to do is to remove the Althing from the building to another place altogether.
What reason anyone or anything has to haunt this building is unknown. Perhaps it has to do with a spirit tied to one of the artifacts in the antiquity museum or maybe Baldt released evil spirits into the building. Maybe it has something to do with the history of this area, which has countless stories of otherworldly visitations. Perhaps it has something to do with the type of work that happened on this street.
Other than being next to the church, Reykjavík's oldest cemetery was just down the street. When the cemetery stood in the way of the city's growth, excavations began before all the bodies were transferred elsewhere and houses and gardens built on top of them.
A few houses down, on Kirkjustræti 2, was the location of the first hospital in Reykjavik (1866) and the first location of the medical school (1876). Kirkjustræti 12 on which the property the Althing House was built on, housed the first medical research labs in Reykjavik. A building in the backyard was used to dissect bodies. This building was later used to house the Nurses Association.


Whatever the story is, the Althing's House continues to be considered haunted.