Ghosts visit the funeral of a spiritist, Part 2

Part 2. (Read Part 1 here)
After the funeral service at the Kvaran home on Sólvallagata 3, the service continued at the Free Church (Fríkirkjan) on Fríkirkjuvegur 5. As Hafsteinn entered the church, he saw an exceptional glow and a large group of spirit-beings appeared in the distance. He then saw Einar, his mother and Rev. Níelsson sitting in the front pews. The spirit-beings in the distance started walking towards Einar one at a time and shaking his hand.

Hafsteinn didn't understand why they were shaking his hand, so he asked Finna what this meant. She told him that these men were thanking him for the things he had done for them during their earthly life as well as the after-life. Then the vision disappeared.

Most mediums have something which I have chosen to call a spirit-guide. Whenever a medium is in a trance or otherwise in contact with the world on the other side, it seems as if they are assigned certain spirit-beings to help guide and protect them. Hafsteinn had two spirit-guides. One of them was an older lady named Finna." Quote from Part 1 .

Again, Hafsteinn's eyes were opened to the other world and he saw Einar with his mother. It was as if they were floating rather than walking. Einar then went over to his wife who was still living and mourning his death. He took her hand and touched her cheek. His mother did the same. They then sat down on the left side of the altar. Hafsteinn saw all this while the choir was singing the first psalm.

Next, Hafsteinn saw a group of young spirit-children approaching Einar. Some sat down by his knees, while others held his hands. They all wanted to touch him and be as close as possible to him. Hafsteinn couldn't remember ever seeing such loving gazes from a father to his children as the way Einar watched these children.

Soon after, the vision was over. When Rev. Árni started his sermon, it seemed like Einar stood up and walked over to him. Hafsteinn saw Einar's brother, Dr. Sigurður, and his mother holding Einar's hands. They sat down together while the Reverend spoke.

When the fiddle player started playing, it was like Einar and his loved ones moved further away until they were standing some distance above the altar. Behind them were three spirit-beings. One of them was a man wearing snowy white clothes and carrying a mighty staff in his left hand.
Above him was a blinking star. Bright rays emanated from the man. The rays reached all the way to the fiddle-player. On each side of the man were exceedingly beautiful young spirit-beings. Hafsteinn watched them while the fiddle-player played.


They started singing the psalm þín náðin drottinn nóg mér er, a psalm by Einar Kvaran himself. This psalm is not in English. If it were, it would be called something to the effect of Thy grace, my Lord, is enough for me. Once they started singing, Einar and those who followed him, came closer. Behind them was a group of youth spirits who joined in and sang with the choir. As soon as Rev. Jón Auðuns (also a spiritist) began his sermon, Hafsteinn saw that Einar moved closer to the Reverend.

Instead of his brother, Dr. Sigurður, being by his side, it was now his son, Sigurður who had died from Tuberculosis at age 15. They stopped right in front of the Reverend. Einar sat down. Behind him were two spirit beings. They were both wearing purple cloaks fastened around the neck. In their right hand, they were holding glowing candles which let off a strange scent that Hafsteinn had never smelled before.

After a while, Hafsteinn's attention was directed towards a beautiful landscape which he saw a short distance away. There were valleys and mountains, tree-covered hills and a lake as clear as mirror which gleamed beautifully. In one of the valleys was a small beautiful house.
Behind the house was a beautiful flower garden. Above this land was a purple glow, unspeakably beautiful. The clear blue was unusually clean. It was covered in all kinds of colors. Above this image, Hafsteinn saw the words This is my home (Þetta eru heimkynni mín). Then the vision disappeared, but as soon as it disappeared, a similar one appeared.

Hafsteinn now saw a vast land with hills and valleys. Below it were flower-covered fields. The fields were so vast that Hafsteinn couldn't see past them. It was as if each and every flower glimmered. Above the landscape rested magical display of colors, with the color purple dominating. Above the vision he saw the words: This is the land of the lights and peace (Þetta er ljósanna og friðarins land).

Another medium was also present at the funeral. His name was Ísleifur Jónsson, one of Iceland's most known mediums. 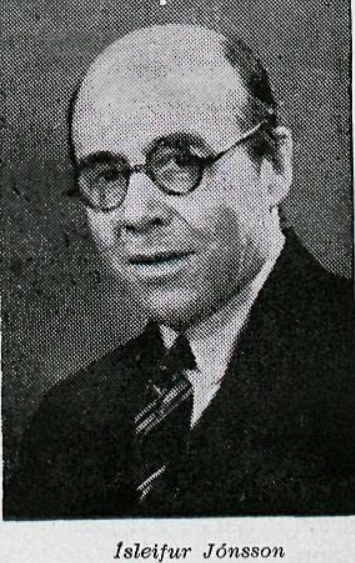 Ísleifur was in the living room at the Kvaran home during the funeral service. Although neither man (Ísleifur nor Hafsteinn) was aware of the other, they saw the same otherworldly visions.
Ísleifur explained that those who had provided help and warmth to others in this life and considered it his/her most important calling, would be received in light and color splendor. This reception has an immeasurable value when crossing over to the next stage. Ísleifur believed that this was exactly what was happening to Einar.