Sorcery and awakening the dead

Austurvöllur. The large grey building in the background is called the Telephone Building
The oldest part of downtown Reykjavik, the heart of the city, is called Kvosin. From east to west, it covers the area from Landakotholt (Catholic Church) to Skólavörðuholt (Hallgrim's Church). From north to south, it covers the area from the harbor to the pond.
Back in the day when the city was just a bunch of turf houses, the city's oldest cemetery was located right up the street or north of the pond. To be exact, it was located on the corner of Aðalstræti and Kirkjustræti. The cemetery was called Vikur Cemetery and its chuch, Vikur Church. The name Vikur is equivalent to Reykjavikur.  According to recordings, people have been buried in the cemetery as early as the year 1200.

Image of Reykjavik as it looked in 1785. Left: View of Kvosin seen from the harbor towards the pond. Right: A cropped and zoomed in image. The letter A shows the church and the letter B shows the location of the cemetery. The corner of the church where the letter H is, shows the corner of Aðalstræti and Kirkjustræti.
In 1784 parts of Iceland had one of its worst earthquakes (Suðurlandsskjálfti), 7.1 on the Richter scale. It ruined many farms and some churches, too, including the Skálholt church. In the aftermath, when discussing the building of a new church, they decided to make Víkur church larger and more fit to be parish. While they were digging for this new and bigger Víkur church, they bumped into old graves of people who died from Small pox. When Dr. Jón Sveinsson heard about it, he feared the remains were still contagious and demanded they stop digging. Out of concern of reintroducing the virus, they decided to stop digging and move the new church location closer to the pond. This new spot was just down the street from the old Vikur church and in 1796 the new church, the Reykjavik Cathedral, was dedicated. Two years later, the old Vikur church was flattened with the ground. 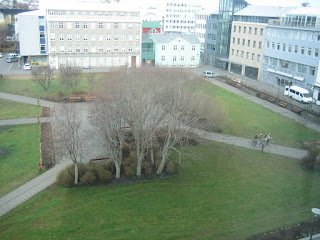 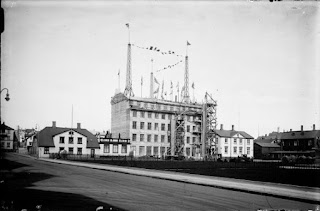 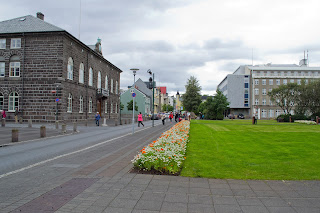 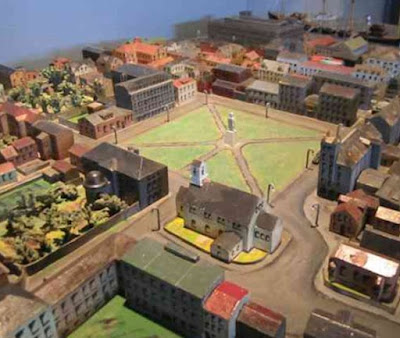 Austurvöllur 1945. The garden can be seen in the upper left corner
Two of the last people to be buried in Víkur cemetery were Marie Josefine Angelique Kruger (the pharmacist's wife, d.1882) and her baby girl (d.1883). She committed suicide in 1882 by drinking phenol and has been known to haunt the house they lived in ever since. She was 27 years old. Their graves were on the corner of Thorvaldsensstræti in the pharmacy's backyard, which was also their home. This house was built in 1877 on Víkur church property. I go into more detail about this story in the book I´m currently working on. 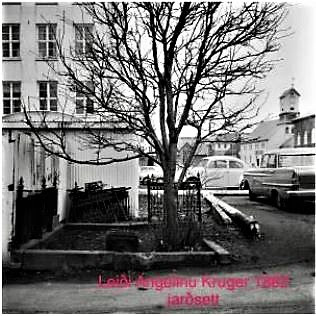 The corner on Thorvaldsensstræti where Mrs. Kruger and her baby girl are buried. This is located on the south-east corner of the Telephone building (see previous picture). This spot used to be in the pharmacy backyard.
Although the church was no longer there and constructions on buildings on the property had already started, they continued to use the cemetery. Finally, in 1838, Hólavalla cemetery was consecrated and they slowly started using it instead of the Vikur cemetery. This was the beginning of the end of the Víkur cemetery where about 30 generations of Icelanders were buried. 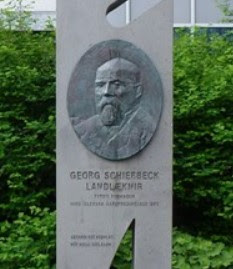 Dr. Georg Schierbeck
Around 1883 Vikur cemetery was turned into a flower garden by the surgeon general (Medical Director), Dr. Georg Schierbeck (mentioned in my blog here). He received the property when he moved into his house on Aðalstræti 11.  Not everyone was pleased with the decision of turning the cemetery into a flower garden. After all, it had only been about 40 years since the last person was buried there. A public meeting was held to fight for the preservation of the cemetery, but to no avail. Dr. Schierbeck got his garden. It turned out to become a beautiful garden where he planted various herbs and trees. He was one of the pioneers in horticulture and forestry in Reykjavik and one of the founders of the Icelandic Horticulture Society in 1885 (Íslenska garðyrkjufélag).

The garden seen from Aðalstræti. The tower on Reykjavik Cathedral can be seen in the background 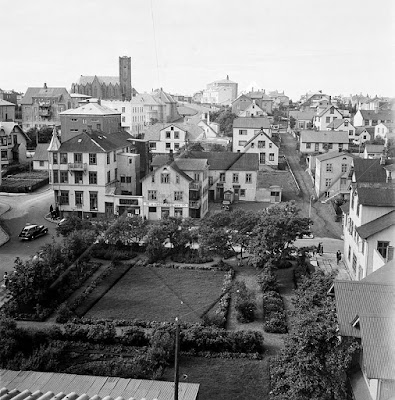 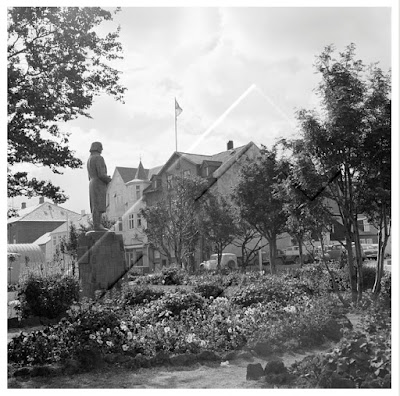 The garden seen towards Kirkjustræti. Picture taken in 1957
As you may already know, and you can read a little bit about in my blog here, some people were considered sorcerers who had the ability to wake up the dead. When a person had been woken from the dead, they became a ghost which is called Móri. Normally, when a sorcerer woke the dead, it was usually done to cause harm to another. The Móri would be commanded to haunt and terrorize certain people or families.
Waking the dead was a complex ritual and had to be done exactly right or the sorcerer ran the risk of being haunted by the ghost himself. Depending on the source, the rituals are described slightly different. The sorcerer had to recite corpse-exorcism by the grave of the person to be awakened. He would cover himself in a white shroud so he looked like a ghost. He would then circle the grave backwards and counter-clock-wise a few times while reciting various exorcisms, psalms and prayers.
Everything was done backwards and the devil was included in the prayers. It was very important that he did not to stumble over his words and his magical skills had to be exceptional. Once the magic started taking effect, the first sign that it was working was that a little bit of dirt would burst up from the grave.
Slowly, the bursts of dirt increased until the ghost rose from the grave. That's when the main magic was to take place. The sorcerer had to fight with the ghost and overpower it. During the struggle the sorcerer had to lick the froth coming out of the ghost's orifices. Once the sorcerer had overpowered the ghost, he now had full control to do as he pleased with it.
In 1816 the surgeon general/Medical Director (landlæknir) was Oddur Hjaltalín (1782-1840). He was the son of the famous writer and Rev. Jón Oddsson Hjaltalín (1749-1835). The surgeon general was also a scholar and a poet. After a year in medical school, he went to Denmark to continue his studies as a surgeon. After his studies he was ready to come back home, but was unable to do so due to the Napoleon wars. Instead, he ended up traveling to various places serving as a military doctor.
Spending time abroad undoubtedly gave him invaluable experiences which he never would have gotten in Iceland. Eventually he made it back to Iceland where his life changed drastically. Being an island it was naturally more dull than the European city life. In addition, there weren't many foreign visitors as the Napoleon wars greatly affected the sea traffic. 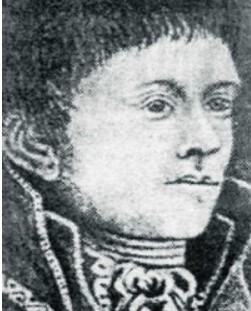 Oddur spent much of his time getting to know the people. Back in those days people were very superstitious and had strong otherworldly beliefs. It was a common belief that it was possible to wake the dead. Oddur became very curious and interested in these beliefs. In order to gain a deeper understanding, he befriended a sorcerer. At first, the sorcerer was hesitant and reluctant to share his knowledge with the surgeon general. It didn't take long until the sorcerer realized that Oddur was already quite knowledgeable in wizardry and a close friendship between them developed.
One day Dr. Oddur Hjaltalín wanted to wake up the dead, but wasn't knowledgeable enough to perform the ritual properly. He approached the sorcerer about his desire to learn the ritual. The sorceror told Oddur he would teach him. They met on numerous occasions discussing the matter of waking up the dead. When Oddur had learned the ritual, they decided to go out to Víkur cemetery to try it out. It had to be on a dreary, dark night when the moon had barely begun waxing. 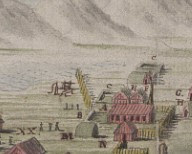 To the center left you can see the pond. The red building labeled A is Vikur Church. It is located on the corner of Kirkjustræti and Aðalstræti. The letter B shows the location of the cemetery
They didn't want to be seen, so they were careful not to be seen by anyone. This wasn't hard to do as there weren't many people out and about on this dark and dreary evening. When they entered the cemetery they covered themselves with white shrouds. Clad in white sheets, they walked over to a small grave and started preparing for the awakening. The wizard prepared himself for the ritual. Once he was ready he started the ritual by walking backwards around the grave.
He did everything exactly the way he was supposed to, but nothing was happening. He continued more urgently, refusing to give up. After a long while and strenuous attempts, the doctor got annoyed and impatient. He complained to the sorcerer that his knowledge wasn't as good as he had claimed.
Oddur wanted to try it himself and told the sorcerer to be ready to receive the ghost when it woke up. Oddur started walking over to the part of the cemetery where there was a larger cluster of graves. After looking around, he stopped by one of the graves and pounded his stave on top of it saying: Get up, devil, I command you. As soon as he had uttered those words, a ghost appeared covered in white shroud. He was very large and awful to look at. The doctor pointed at the sorcerer and said to the ghost: Over there is a man, kill him.
The ghost looked at the sorcerer and charged over in his direction. The sorcerer, scared out of his mind, picked up his feet and ran towards the soul gate as fast as he could. The soul gate is the gate straight across from the church doors. Once by the gate, he turned around and saw the ghost still charging after him. The sorcerer kept running as fast as he could up to Landakot and all the way to his home on Seltjarnarnes.
Oddur couldn't stop laughing. He couldn't believe how thoroughly he enjoyed scaring the sorcerer and watch him run for his life. It so happened that the doctor had gotten a friend to sneak into the cemetery and when given the sign, appear dressed up as a ghost and chase the sorcerer. The doctor never grew tired of telling this story to his friends and acquaintances.