The wildest night of the year

The elves are out! Look for them and you might spot them as they search for a new home. This is the time of the year when they cross the dimensional plane and make themselves visible to us.
There are plenty of otherworldly rumors about New Years Eve (NYE) and I will get to them in a moment, but first let's take a look at what an average NYE is like to practically all who reside in Iceland.
It all starts with a delicious socialized dinner around 18:00-19:00 with family and/or friends. Delicious meat, caramelized potatoes, red cabbage, peas and Appelsín (orange soda) are among the foods to expect. 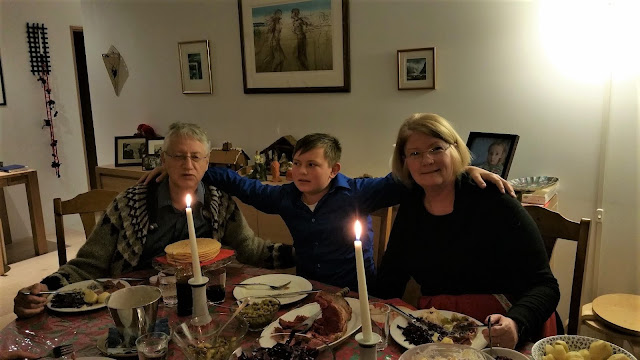 Once everyone is full and the table has been cleared, it's time to put on your warm clothes and head out to the nearby Áramótabrenna or the New Year's bonfire. These normally start around 20:00-20:30, which gives everyone enough time to finish their dinner.
The first bonfire ever recorded was done by some school boys from Hólavallaskóli in Reykjavík in 1791. They gathered barrels and all kinds of timber garbage and piled it up in a place they called Vulcan which was near the school. This is believed to have been at Skólavarða where Hallgrímskirkja is today (some will argue it was at Landakotshæð).
About 50 years later, the bonfires were common place and attracted drunken and noisy teenagers. To divert teens and vandalism away from the downtown area, the city allowed bonfires throughout the suburbs.
In 1872 (some say 1871) some 70 boys at the Learned School (Today called Reykjavik Junior College) started dancing álfadans (elf dance) around the bonfire. They were premiering the play New Year's Night which had elves in it.
The students from the Learned school and Copenhagen split into two groups: light elves and dark elves. The two groups carried torches as they made their way towards the city center. They sang and danced until they met in the middle of Tjörnin (the Pond in Reykjavik). There they continued to dance elf dances and sing national songs. They repeated this again in 1874 and in 1875.
Some say the bonfire tradition dates back to the Middle Ages or even further when the fishermen threw out all their old stuff to make room for the new.
This was very similar to the story I was told as a child. We would bring old stuff from our house to burn in the bonfire. The idea was to clean out the house to make room for all the new stuff in the year to come. Most bonfires today are more controlled by the city and don't allow people to bring their garbage to build a fire.
Standing by the fire with my family all wrapped up in warm winter clothing and feeling the heat on my face was heavenly. I remember watching the old thrown out garbage burn into oblivion, leaving only ashes behind. Beginning a fresh new year wasn't just an idea anymore, it was a tangible reality and it felt great. A ritual cleansing perhaps in some way. 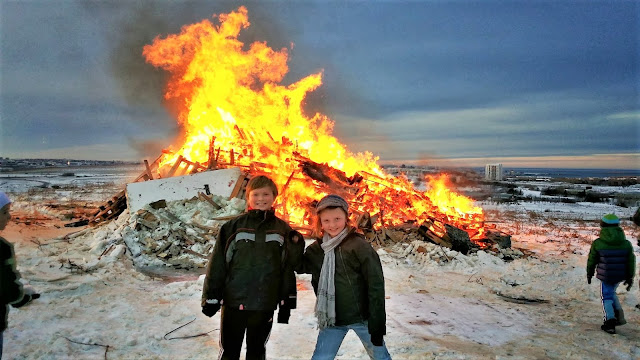 If you are lucky, the elf king and queen will visit the bonfire you're at and everyone will sing elf-songs  and dance elf-dances.
This year is the first time in nearly 200 years, that this tradition is broken. There will be no bonfires on New Years Eve due to Covid.
When the bonfire is over, it's time to head home to watch 'Áramótaskaupið' or 'The Comedy' which starts at 22:30. The satire was first aired on the radio in 1948 and later moved to television when Iceland got its own TV station Ríkissjónvarp (The Icelandic National Broadcasting channel) in 1966.
The entire country turns their TV on to watch. To put this into perspective, the most recent Gallup poll showed about 98% of all TVs in Iceland had the show turned on and 75% of the population said they actually watched it.
The show consists of multiple satirical skits that make fun of both national and international politicians and other famous (and non-famous) individuals who had been in the news or made the headlines during the year.
It is guaranteed that the day after, you will be asked what you thought of it. Everybody has an opinion about it and it's usually I loved it! or I hated it! followed by a discussion.
Most of Skaupið is in Icelandic, but if you are curious to watch some of these episode, they can be found here áramótaskaup - YouTube
After an hour of TV entertainment, it's time to get ready for fireworks. This is truly the Greatest Show if you enjoy watching fireworks. Tourists from all over the world visit Iceland just to experience the extravagant New Years Eve celebration.
This is also the time when fireworks are legal to purchase for the residents and they go all out. We don't have to feel bad about spending the money, because it all goes to ICE-SAR, or Icelandic Search and Rescue Teams which is run by volunteers who keep us safe on land and at sea throughout the year.
ICE-SAR get most of their funding through the sales of Christmas trees and fireworks. In 2017, they made ca. ISK 800 million from fireworks alone, which equals USD $6.8 million and €6.0 million. That's a lot of fire in the sky. A few sources mentioned there being about 500 ton of firework purchased per year.
It's almost midnight and everyone has found their spot outside and are ready to 'sprengja út árið' or 'blow out the year' as it is called in Iceland. First we burn the old year with fire and then we blow it out.
For tourists looking for the best firework display are usually directed to Hallgrímskirkja church or Perlan. If you plan on bar hopping, then Hallgrímskirkja would be the best location as it is only a walking distance to all the pubs and bars.
There are several of other great firework sites as well. Many enjoy watching it by Tjörnin where they can see the fireworks reflecting in the water.
The firework display is completely provided by the people of Reykjavík and is not funded by the city.
Around 1:00 a.m. the show is over and the partying begins. People go to house parties, bars or clubs.
The parties aren't just for those looking for bars and drinking.
There are a few legends out there about the magic that happens on NYE.  The most known legends are that cows will finally be able to speak and you can have full on conversations with them. But be warned. Many have gone mad after conversing with the cows.
Another known legend is about the seals. Tonight they will not only shed their skin, but they will take on human form.
The dead will rise from their graves tonight so they can go to church, only to disappear again. While they are at church, the souls of those who will die in the following year visit the cemetery and try out the empty graves to see if they fit.
Make sure you pay attention to your dreams tonight as it will reveal important information.
At Christmas the elves have constant parties where they listen to music and dance. They do this both in their own homes and in human homes.
When the new year arrives, it's time for them to move on. It's important to leave candles out for them and to keep the house clean. It is also important, if you want to keep the peace with the elves, that you tell them that they were welcome in your home.
You could do this by walking around the house saying it out loud. An example would be to say or even sing:  "Come those who wish, Leave those who wish, Stay those who wish me and my people no harm"  Having a family of elves move in nearby can bring you good fortune, so don't forget to invite them.
Also make sure to leave a plate of food in remote places for their travels.
Iceland loves taking care of their tourists and don't want them to miss out on the traditions, so there are several ways to experience them. A couple of such arrangements can be found here: New Year's Eve and Bonfire Tours and here: Iceland new year tour package.
Email Post
Labels: Christmas Holidays New Year